What a rainy wet weekend we had, the light was so flat, however I used what daylight I could to begin painting again. After setting everything up, and getting everything out I was tempted to complete a half finished painting which I had begun last April, but thought that perhaps a fresh start would be better, so I chose a photo from my iPad which I had taken in the New Year after a fall of snow.
I decided to limit myself to just 5 colours. Shadow, Bluebell, Raw Sienna, Burnt Sienna and White.
I began by blocking in the dark areas using a dilute mix of Shadow and Bluebell.
I spent the first half hour or so finding my feet a bit, and I must admit to dithering! I couldn't quite decide on the depth of colour and should, in hindsight have just used one colour and scrabbled it on quickly rather than faff about too much. Anyway this was the start. 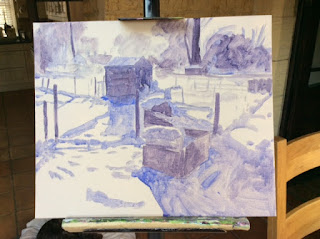 It began to get quite dark so I decided to leave it till the next day and begin another one in artificial light. My overhead lights are pretty good, so I prepared a couple of canvas boards by coating them with two layers of Pale Raw Umber as my mid tone base.


Then I became much bolder applying the paint with more confidence and this was my second painting. Same two colours but applied quite differently. I don't chose to paint in artificial light  as I always find it affects the colours too much, but I was just keen to get going while I felt like painting and I really enjoyed getting stuck in to it again. 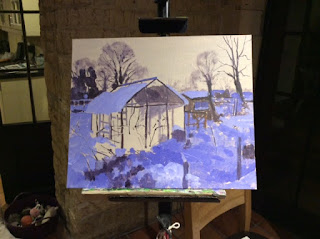 When I looked at this the next morning it did seem rather bold, so I decided to work only in daylight and only paint in artificial light to prepare my boards. I'm used to painting demos indoors of course, but a demo is very different from painting an actual painting, in the sense that a demo is designed to teach techniques, rather than merely to complete a painting in front of an audience.

This was the first painting once I had worked on it the following day. Its 10 x 12 inches. 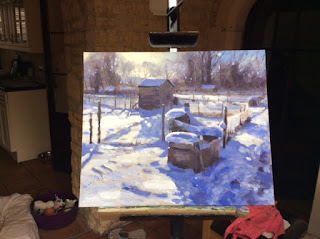 Below is my second painting in late afternoon light.
Maggie my little schnauzer is curled up on her bed, she is always with me. Occasionally she will push her little nose against me if she wants something, or brings me a squeaky toy if I have been painting for too long!

Terry and I had different studios and we would always comment on each others work. I missed him standing next to me with his coffee in hand, looking intently at my painting before offering advice, a little bit of dark here, or some light there. That voice by my side when he popped in and out throughout the day. I feel so blessed to have had him in my life for the time we were together.
So these are my first two paintings.
Thank you for your emails and comments which have encouraged me so much. Now that I have made a start I am sure to continue. 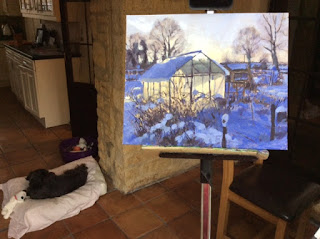 It was April last year that I last painted. Never has so much time passed by, without me picking up my paint brushes, but for the first time since then, I now have an urge to paint again. I have been thinking about it for a couple of days, but today was different, I felt a real determination rather than just a thought.When we had the heavy snow fall a few weeks back I went out and took some photos, this was my first step to thinking about painting subjects again. 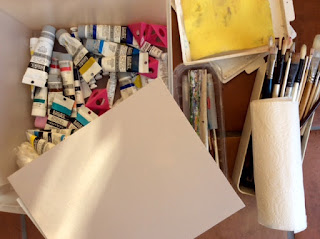 There were two stay-wet palettes and this was the first one I opened! The smell was so overpowering as I lifted the lid that I ran outside, threw away the paper palette and the box and sponge are now soaking in bleach! 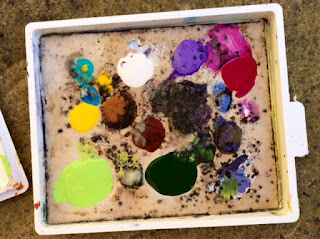 So I now intend to set up my easel and see what happens.

Hopefully I will have something to share with you, and it would be so encouraging to know you are interested in what I paint!
Posted by Fiona Peart at 13:19 6 comments: